VR - A Future With a Purpose

VR has the potential to change the way we learn, communicate, entertain ourselves and how we look at the world. It is a technology which can change the very fabric of our lives, making it brighter, and better.

Virtual Reality was once the dream of science and fiction. But the internet was also once a dream, and so were computers and smartphones
- Mark Zuckerberg

This quote by Facebook's CEO points towards one thing -- we're really good at striving towards turning dreams into reality. How about turning the reality into a dream?

Our desire to go beyond the horizon is fuelled by the horizon itself, as made evident when the founder of Oculus VR, Palmer Luckey asks, "Why shouldn't people be able to teleport wherever they want?" 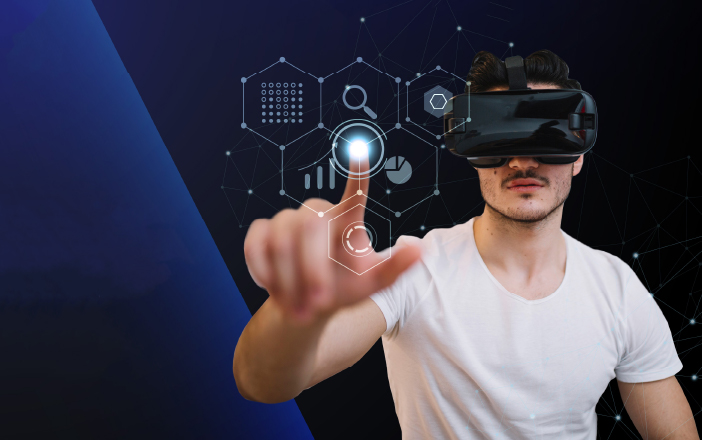 Recall a lonely day when you felt you miss your family, your loved ones and sweet home. Tough right? Now imagine this -- the next time when such emotions strike -- you put on a VR headset, and so do your loved ones, and you meet them in the virtual simulation of your home and blow a kiss to your mom, hug your dad and have all the banter with your little brother until you beat your nostalgia. Sounds cool?

This is how VR can transform your communication and it is not something from the far future. The University of British Columbia Law School is already using VR to enable their distance learning students to interact with the teachers and fellow students as if they are in a real classroom. 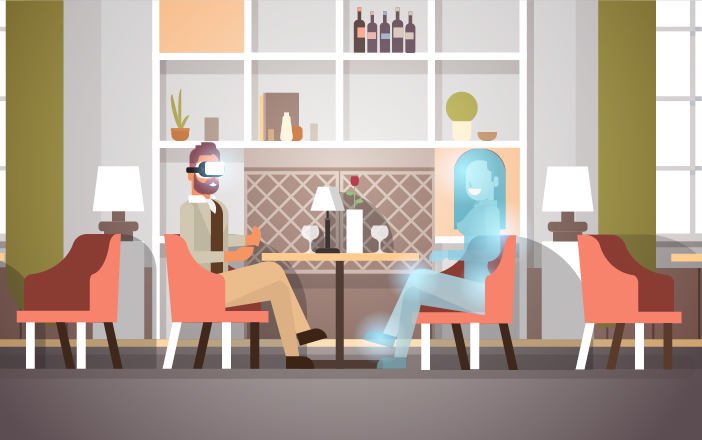 The transformation is not limited to the social sphere but also to how businesses communicate among themselves and with the world. You can cut on unnecessary travel to other parts of the world to meet your clients. Instead, you can just put on a headset and meet them in seconds. Similarly, organise conferences, events and guest lectures without the need for people to physically present at a particular place.

Virtual Reality is becoming a powerful tool for organisations to communicate with the world. While launching its new Q7 vehicle in Moscow 2015, Audi presented the modern and hi-tech project in a Virtual Movie Theatre by inviting the audience and allowing them to witness the Realistic Experience in Virtual Presentation.

"There was a lot of laughing going on, holding hands -- lots of social behaviour. It didn't take away from the event -- it only added to it." said Brandt Krueger, an educator, speaker and consultant who specializes in the field of meeting technology, during a MeetingsNet Webinar.

TATA Motors, while launching its flagship car Harrier, partnered with iB Cricket to promote their new car. This experiential marketing delivered a memorable experience to its customers.

Rewind your education to the point where you were first introduced to three-dimensional space in your Math class. Looking a third axis on a two-dimensional whiteboard could have been quite confusing until you figured it out what it meant with time. 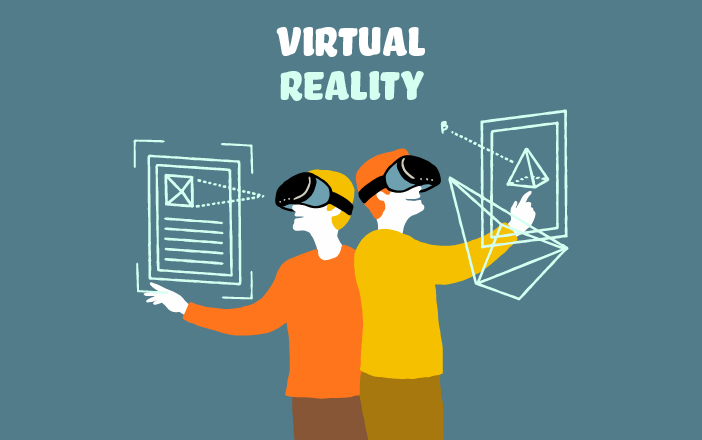 The digital revolution in the last decade added visual elements to the classroom that are beyond the drawings in textbooks. Educational videos helped better visualisation and improved retention among learners. A video explaining three-dimensional space could help you visualise and easily understand the concept faster than the whiteboard way. However, you still are learning 3D in 2D. You still only see and hear.

Now unleash virtual reality and you don't just see and hear, but also interact in a 3D space. As a child, you could have learnt about 3D space in no time with the same exuberance as the young boy in this video.

VR finds boundless applications in education. From simple math classes to the advanced subjects ranging from archaeology to astrophysics you don’t just learn in VR, you live it. For example, you could study Mars by transporting yourself onto the red planet -- study tornadoes by sitting right at the centre of one -- And the blood cells by flowing through the blood vessels. The list doesn’t end unless your imagination does.

VR in Surgery and Healthcare

With all probability, you must have undergone training for the initial few days to months to become adept at your job. What were the stakes if you made an error? Judge it yourself for your profession.

The higher the stakes of a job the complex it becomes to train a novice. Surgeons sit on the top rungs of the ladder of stakes. Stakes for them usually are human lives. A novice surgeon during his early learning curve might err which could result in complications in patients. Research suggests that with existing surgical training methods, up to 30% of the trainees are unable to operate independently after their graduation. 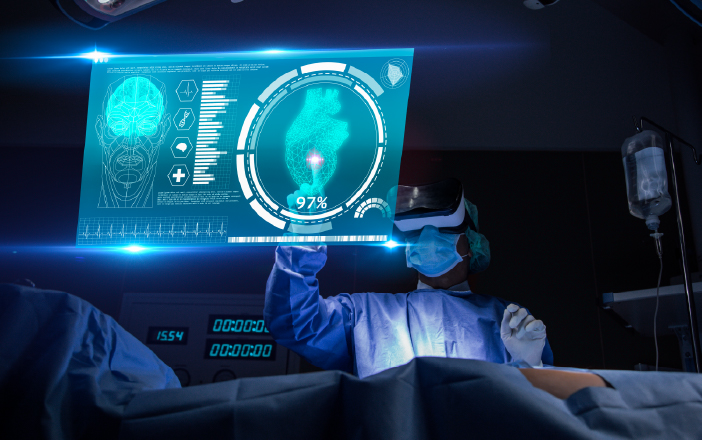 Virtual reality offers a solution to train inexperienced surgeons in a virtual environment before they operate on patients. Studies have demonstrated that VR training significantly improved surgeons performance while a case-study concluded that surgeons trained via VR performed 29% faster and made 6x fewer errors than those trained via conventional methods.

In case of complicated surgeries such as brain and spine, VR helps doctors to plan and practice the surgery as many times as desired beforehand with various possibilities and settle down for the best one. Without VR, doctors would have only one shot to give -- directly on the patient. Surgeons at the Stanford Medical Center in California used virtual reality to plan, perform and also communicate to the patient about the complex brain surgery.

Similar to Surgery and healthcare, virtual reality is becoming an indispensable tool for companies across industries to train their workforce in specialized tasks which include risky and high-stakes scenarios.

Verizon has deployed VR to train their frontline workforce in their stores across the USA for dangerous situations like armed robbery. On the other hand, Walmart is training its employees using VR to artificially create high-stakes scenarios from business perspective such as dealing with angry shoppers. The company also mentions it has seen significant improvement in employee test scores using VR -- 70% of the employees who used VR scored better than the group that did not use VR. 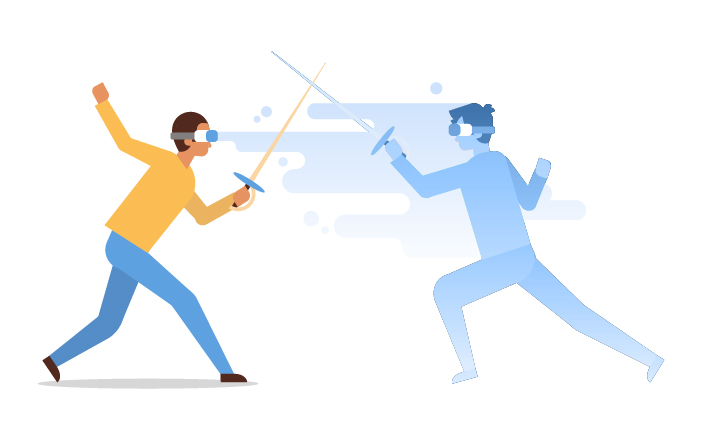 Anything with fast-moving parts is dangerous. Machinery maintenance is another domain that involves hazardous situations. Furthermore, complex machinery involves high costs where companies cannot afford to have damage to equipment. VR promises powerful training solutions to engineers who work with mean machines.

Complementing its practical training, Rolls-Royce and Qatar Airways started using VR to train their engineers in aircraft engine maintenance -- one among the most sophisticated machinery on the planet today. The company notes that VR training will save time, money, and frees up engines which could be used on the aircraft flying passengers. 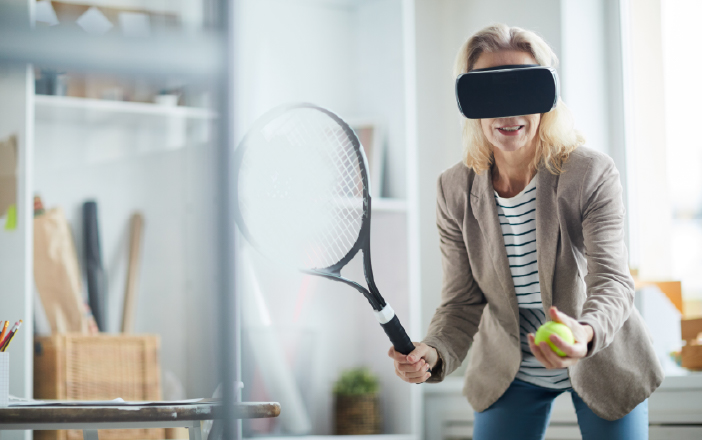 No other platform is exploiting VR technology as much as Sports are. From revolutionising the way sports are played and broadcasted, to giving it's fans an on-ground exhilarating experience, it's also helping in training the players.

NBA games has brought the sport to the homes of viewers through VR. This viewing experience was the beginning of a revolution which would change the way many sports are spectated throughout the globe. Every fan can now feel like they're viewing the game from the best of the seats in the ground.

The players can have a 3D view of their gameplay in slow motion that they can use to assess their gameplay. Meanwhile, VR offers the sporting experience to everyone which brings in the whole new concept of vSports. More about it here.

And that's not it. Along with disrupting all mainstream industries, Virtual Reality is also set out to radically modernize a few more...

VR has changed the way we assess and spend money on experiences and commodities. Virtual Reality movies and sports are a thing of today, offering an unmatched and unparalleled experience. Now, we can try out various commodities in the virtual world before buying them and spend money on what suits us the best. We can observe places before finalising them as our vacation destinations. 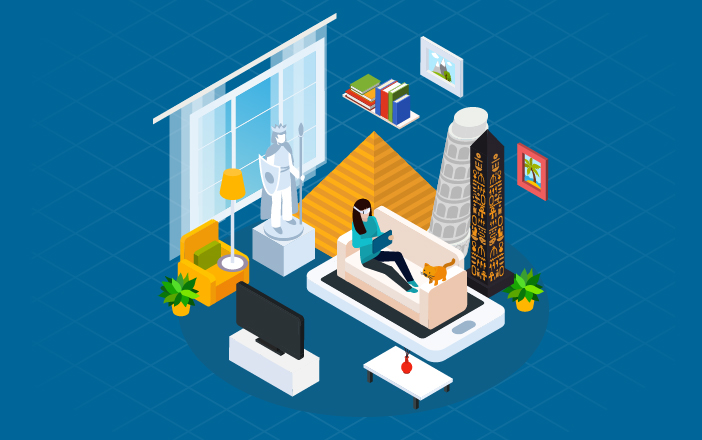 As an extension to being able to remotely view places, Virtual Reality is being used to explore places which are practically too hostile for humans such as the deep seas and the space. Space exploration has been made possible for everyone using VR. The first display of it is being given by the NASA scientists working on the Mars mission. 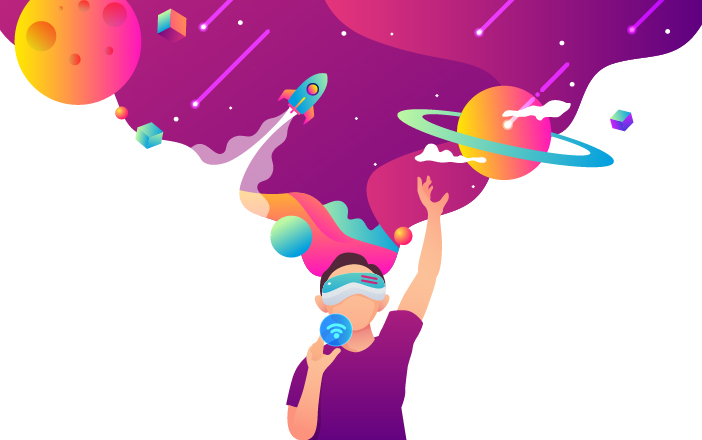 From observing macroscopic planets to focussing on microscopic details, VR does it all. A creative application of VR has been in the reconstruction of a crime scene. Such an application helps in delivering the correct judgement where a jury of peers is giving a decision. In such a case, every jury member can have a perspective upon seeing the reconstruction instead of getting swayed away by a lawyer's arguments.

VR is immersive, and this trait of it makes it highly useful in treating patients facing anxiety attacks. Some soothing visuals is all it takes to sway the patient's mind away from pain and help them get better with every passing day.

VR is being used to treat patients of PTSD by simulating event(s) which led to the trauma and help them get it under control. The immersive experience of VR is highly advantageous when treating paraplegics. VR helps them regain their brain functions associated with the affected body part. After all, to see is to believe, and belief can work wonders! 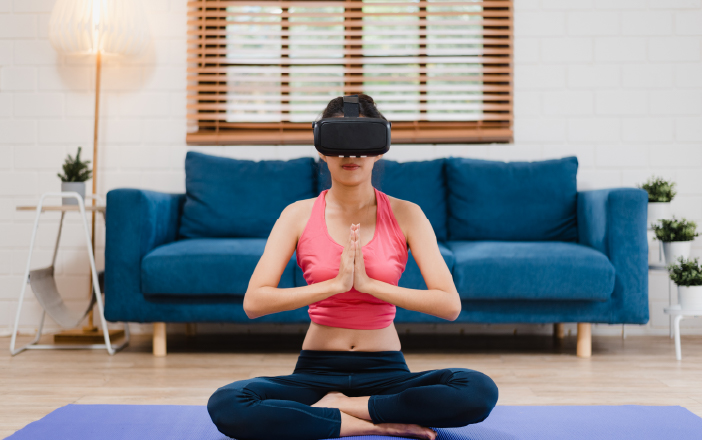 VR is also enhancing the experience of meditation by offering relaxing environments and guided meditations, giving a refreshing experience

Despite such varied and revolutionary applications of VR, it’s full potential remains untapped, and what we see today is just the tip of the iceberg. In future, VR may be used as a generic tool of case studies, to see and understand what people go through during wars or calamities. VR could extend this experience to everyone, leading to an increase in empathy for people who are the victims of it.

Man has always wanted to do the impossible, and using VR, sports which are too expensive or lethal to play physically, such as mega robot, could become a vSport in future.

Maybe VR could go beyond the headset and fit into eyepieces. We can dream of becoming a Tony Stark someday. These eyepieces could monitor our health, make us aware of potential threats, show us movies, help us communicate and may have a smart response to eye tracking.

What the future holds for us, we do not know. But we know one thing for sure and it's that the possibilities are limitless. But as Albert Einstein once quoted, "Once we accept our limits, we go beyond them", mankind doesn't appear stopping at any limit whatsoever!

Do you know any other application of Virtual Reality? Or create one and share it with us at support@ib.cricket